methylcheck is a Python-based package for filtering and visualizing Illumina methylation array data. The focus is on quality control.

This package contains high-level APIs for filtering processed data from local files. ‘High-level’ means that the details are abstracted away, and functions are designed to work with a minimum of knowledge and specification required. But you can always override the “smart” defaults with custom settings if things don’t work. Before starting you must first download processed data from the NIH GEO database or process a set of idat files with methylprep. Refer to methylprep for instructions on this step. 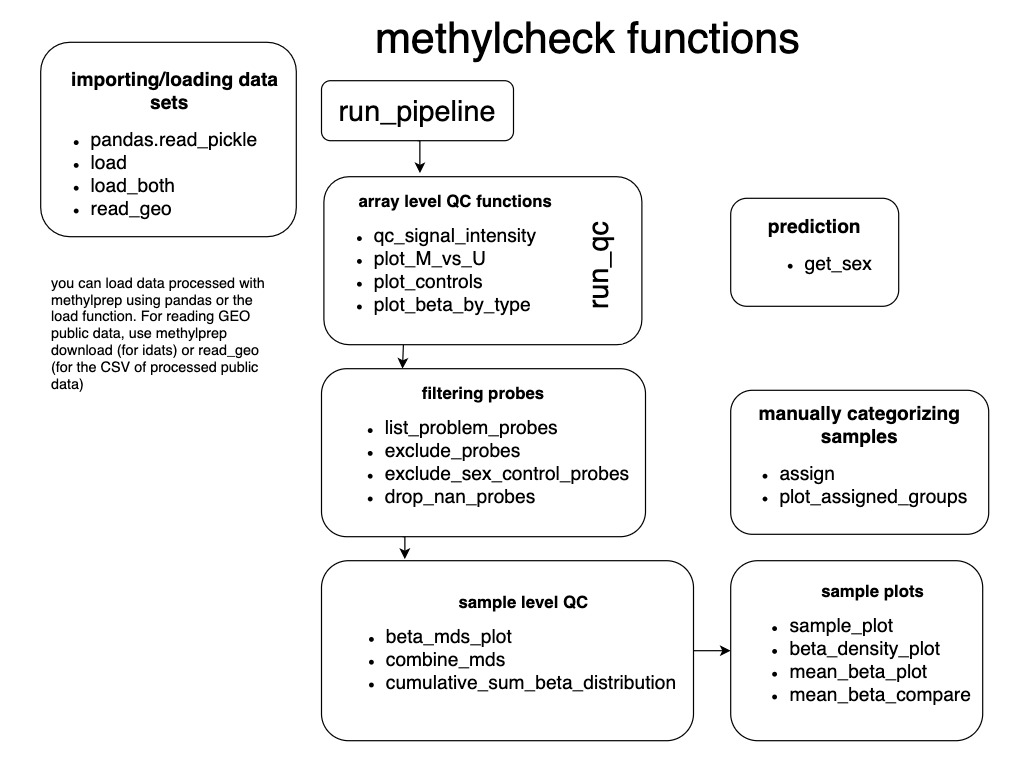 Methylcheck is designed to accept the output from the methylprep package. If you have a bunch of idat samples, methylprep will return a single pickled pandas dataframe containing all the beta values for probes.

Load your data in a Jupyter Notebook like this:

If you processed a large batch of samples using the batch_size option in methylprep process, there’s a convenience function in methylcheck (methylcheck.load) that will load and combine a bunch of output files in the same folder:

This conveniently loads a dataframe of all meta data associated with the samples, if you are using public GEO data. Some analysis functions require specifying which samples are part of a treatment group (vs control) and the meta dataframe object can be used for this.

For more, check out our examples of loading data into ``methylcheck` <https://life-epigenetics-methylcheck.readthedocs-hosted.com/en/latest/docs/demo_qc_functions.html>`_

In general, the best way to import data is to use methylprep and run

collect the beta_values.pkl file it returns/saves to disk, and load that in a Jupyter notebook.

If idats are not available on GEO, you can imported the processed tabular data using methylcheck.read_geo. This will convert methylation/unmethylated signal intensities to beta values by default, returning a Pandas dataframe with samples in columns and probes in rows. As of version 0.6, it recognizes six different ways authors have organized their data, but does not handle these cases yet:

If you include verbose=True it will explain what it is doing. You can also use test_only=True to ensure the parser will work without loading the whole file (which can be several gigabytes in size). Test mode will only return the first 200 probes, but should parse the header and detect the file structure if it can.

From there, each data transformation is a single line of code using Pandas DataFrames. methylcheck will keep track of the data format/structures for you, and you can visualize the effect of each filter as you go. You can also export images of your charts for publication.

Refer to the Jupyter notebooks on readthedocs for examples of filtering probes from a batch of samples, removing outlier samples, and generating plots of data.

The simplest way to generate a battery of plots about your data is to run this function in a Jupyter notebook:

There is also a methylcheck.qc_report.ReportPDF class that allows you to build your own QC report and save it to PDF.

Parts of this package were ported from minfi, an R package, and extended/developed by the team at Foxo Bioscience, who maintains it. You can write to info@FOXOBioScience.com to give feedback, ask for help, or suggest improvements. For bugs, report issues on our github repo page.